Letter to My Younger Self 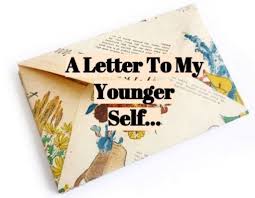 It’s hard to believe that I will be turning 18 soon. Officially, I will be an adult with adult responsibilities. During the course of my life, I have learned a lot from my successes, trials, and tribulations. Sometimes I wonder what it would be like to talk with myself 10 years ago. What would I say? Would I warn myself of the trouble or just showcase the highlights? After some reflection, I imagine I would say something like this:

I never thought I would get the chance to tell you this. Granted, I never thought time travel would be possible, but here we are. Just looking at you takes me back. Blonde poofy hair, big bold stubborn attitude, and of course sporting the hottest apparel from Justice. You hate vegetables (which aren’t actually that bad except peas; peas are the worst thing ever created), and you rock a karate uniform. You have encountered so much in your 8 years but you still have more headed your way. Don’t be too scared. Life is tough and, hopefully, I can share some wisdom from what I have learned to guide you.

First off, nothing comes easy in life. As you get older, you will see that you have to earn everything, and nothing is served on a silver platter. Well, one time I had seafood served to me on a silver platter, and it was delicious, but that is beside the point. You have an entire life ahead of you and very little limits. Reach for the sky and become whomever you want to be. If you want to be a pilot, an astronaut, a chef, an engineer, or even a unicorn, don’t let anything stop you…but the unicorn might be physically challenging, so maybe not that. Right now, you want to be an astronaut. Space and the unknown are frightening, but that’s also why it intrigues you. What will happen in life is unknown, but that is also most fascinating part. There is so much to do, and with some elbow grease (and pixie dust for sparkle), you can achieve anything to infinity and beyond.

However, while you can work hard for what you want, you will not always get it. Sometimes you can do all the right things, and it still doesn’t work out. In middle school, you won’t make the volleyball team nor the basketball team. You were supposed to go on many vacations and trips, and many were cancelled. You waited and cared for someone while they were gone to only find out that you weren’t enough for them when they finally get back. But as the movie Mulan put it, “The flower that blooms in adversity is the most rare and beautiful of all.” You will endure disappointment and heartbreak and tons of unfair things, but you fight back. Remember in karate when you learn to get back up? Life can be like that; it can knock you down, and you have to learn to stand back up and even sometimes give it the middle finger. Guess what, in high school you ended up playing on the freshman basketball team. You got to travel to Germany with some of the best people you have ever met. You grew as a person and realized that you were more than that one person who broke your heart. You are strong.

Strength is crucial for tackling the unknown in life, going out on a limb and taking risks. I have found some of my greatest successes doing this. One example of this was my trip to Germany. It was a different culture, and at the time I was facing serious medical setbacks and going to Germany was not ideal for me. I didn’t want to leave the comfort of my home (and go 2.5 weeks without american TV). I was scared, and even though I went with my friends, I thought that I was going to hate the experience. But I went and it turned out that it wasn’t the end of the world. You will have challenges, but like I said before, you know how to get back up. You learned more about yourself and your capabilities on this trip. Don’t expect anything because life can be surprising whether it’s for the worse or for better. “Adventure is out there.”

I know I shouldn’t tell you what I would change, but I will tell you my biggest regret anyway. It is your life, not anyone else’s, so don’t live it for anyone else. Take the classes you want to take, do sports or activities that interest you, pursue what you want to do after high school. My whole life I tried pleasing everyone else, especially one person. News flash, you are not selfish if you put yourself first. You will lose touch of happiness if you don’t start making yourself a priority. Who cares what other people think, as long as you aren’t harming anyone you are perfectly entitled to pursue your passion.

Now, I didn’t want to make you sad or depressed, but this was important for me to tell you. You deserve some explanation to what will happen and some insight to life. Also a couple other things you should know is that pb&j is the best sandwich, High School Musical 2 is the best High School Musical and never take a bunch of Germans into Walmart. You are so smart and have such a bright future, and I hope that my advice can help guide you. Even though it seems scary now, you’ll turn out ok whichever path you decide to take. In the words of Walt Disney, “If you can dream it, you can do it.” You’re going to have one hell of a life.