Being Crazy Wasn’t Enough: Why Jared Leto is the Worst Joker

SPOILER ALERT: This piece may contain some movie spoilers!

It’s no secret that our culture has a strange fascination with characters who are portrayed as crazy or evil, and it’s no secret that a large part of these fascinations come from the actors playing the characters in various movies or TV shows. If you listen to experienced and serious actors about their craft, you’ll very quickly start to observe that there’s a very clear art to acting, and not everyone can figure out the complexities of being someone you’re not. But how do you be someone you’re not? One of the ways that requires the most focus and talent is the art of method acting, which is when an actor will continue to portray their character when not even on set or in front of a camera. They literally become that character in their everyday lives. This style of acting has lead to many great performances in the past, but none as famous or iconic of a story as Heath Ledger and his interpretation of the Joker in The Dark Knight.

I’ve seen the movie dozens of times; it’s a classic. Not only is it a groundbreaking film in terms of the actors’ performances, but it was also doing something that not many superhero movies were doing at the time. It was making superheroes realistic. Sure, not everything is realistic. A millionaire going around in a bat costume beating 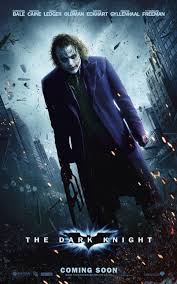 up criminals will always be an obscure concept, but most of the realism comes from the political aspects of the film, as well as how real the Joker’s threats feel and turn out being. So what made Heath Ledger a good joker? Simple. He was extremely dedicated to the role and made sure he respected it. He was so dedicated, in fact, that it killed him. Now, of course I’m not saying you need to go that far with method acting to have a good performance, but it’s just something that happened unfortunately. He spent weeks by himself, locked in a room, journaling, all in character, so that when he went to the stage, he made a convincing performance of a character who is on the farthest spectrum of extreme possible. He understood the character, and he respected the art of acting and the people he was working with.

Speaking of respect, let’s talk about Jared Leto, which is the very definition of a disrespectful actor. Not only to the craft itself, but also to his crew mates. Let’s start with the more well known story. His way of method acting was (obviously) to stay in character the entire time they were on set, even when the cameras were off. To show just how great of an actor he was, he sent gifts to the cast while in character! That’s so cool, must’ve been pretty exciting to get a joker gift, because the Joker is supposed to be really funny in an extremely dark and insane way. But then you read what he sent them and it’s not even a clever joke. He sent Margot Robbie, who played Harley Quinn, a dead rat. He sent many of the cast members used condoms, and brought a dead pig to rehearsal one day. The only gift he sent that was actually somewhat clever was sending Will Smith bullets, because Will Smith plays Deadshot, and Deadshot uses guns most of the time. Not only is sending used condoms literally a sex crime, but if you watch interviews with various cast members, it’s pretty clear that they were less than pleased with Leto’s gifts. Amusingly, the only person who didn’t get a gift was Viola Davis, and asked why she didn’t, she said, “I did not receive any personally, or else I would have gotten my husband — who was called ‘Headache Ball’ back in the day when he played football — and I would have said, ‘Take care of the Joker.’” It’s extremely obvious that Davis found these sort of Joker antics downright disrespectful and gross, including that she never even really met Leto until after the shooting of the movie was over, because he was the Joker during shooting. So we’ve got the gifts out of the way, the only other thing to mention about Leto during off screen performance was the fact that he made an actor who played one of his henchmen in the movie do things for him even when they weren’t rolling the cameras. He also had everyone refer to him as “Mr. J” which is the cringiest thing I’ve seen in a long time.

So now that we have the fact that Jared Leto is a disrespectful and awful method actor, let’s talk about the actual Joker in the movie, as well as the movie itself. Now, to be honest, I’m not sure that I can blame Leto entirely for the awful performance here, but he certainly didn’t help. There’s obvious problems with the competency of the script itself. It’s like the people who wrote the Joker character didn’t understand him at all. They show he’s a crazy guy, but there’s no relatability here, and it’s not even developed at all, like in the 2019 Joker movie. But wait, Heath Ledger’s Joker wasn’t developed either, the first scene of the movie he’s doing crazy things. Yes, but the difference between Leto and Ledger is that when making The Dark Knight, Ledger and Christopher Nolan (the director) took as much time and effort as they could to develop the character OFFSTAGE so that he would be believable ONSTAGE. Leto doesn’t do that, or at least fails at it if he was trying to do it. There’s also the problem that the Joker literally does nothing in the entire movie that’s significant. He kills a few people or whatever but he doesn’t really have any impact on the story. Which is good. If you’re familiar with the comics, Joker isn’t in the suicide squad as a member. So why put him in the movie? It’s also worth pointing out that a lot of Leto’s scenes were cut out of the movie, so maybe he was better at some point, but I don’t think it would’ve helped all that much to be honest.

Now let’s talk about one small thing before getting to the last really big thing. His laugh. Anyone who is alive today and is at least in their teenage years has most likely heard the Joker laugh in one or more different interpretations of it. There are actually a few good videos on YouTube that show every Joker laugh since all the way back in the 60’s, and when I say every laugh I mean movies, TV shows, cartoons, even the Lego Batman movie. The video is literally 20 minutes long, and after watching all of them, there’s a really clear distinction between Leto’s laugh and literally every other Joker laugh. Every actor has had a slight variation of the maniacal and insane Joker laugh, but Leto’s is absolutely horrendous. Look it up, you’ll know what I mean when you hear it.

And finally, the thing that bothered me, and several other people, the most. HIS APPEARANCE. Joker looks ridiculous in this movie. I can see what they were trying to go for, which is a more modern version of Joker rather than just the makeup and suit that he’s usually depicted with, but the thing is, every Joker has variation to them, but this one is just awful to look at. Let’s start with his actual clothes, which actually change throughout the movie. For a lot of the promotional posters and trailers, he was either wearing a purple blazer with no shirt underneath, or just 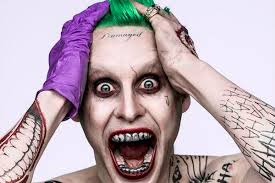 no top at all. It’s like they were trying to sexualize Joker, which is very strange to me. Joker isn’t supposed to be sexy, he’s supposed to be crazy. It’s worth pointing out that when I say “crazy” I don’t just mean “oh he does weird things.” The biggest defining trait of the Joker is that he isn’t just crazy, he’s an agent of chaos. He loves it. He loves scheming, and manipulating, and destroying. Leto doesn’t do that. He just does stuff randomly for no reason at all. But anyway, what else is wrong with his appearance? He has this weird grill on his teeth. A lot of people hated this but to be honest, in my opinion, it’s not that noticeable so I didn’t mind that much. Not to say it was a good choice, but I didn’t really care about it all that much. Now, the worst part about Leto’s Joker appearance was his tattoos. Oh my god, these are laughable. If you look closely you’ll find several cringey ones, but I’m only gonna mention three. The first one, the mouth tattoo on the back of his hand that he holds up when he laughs was just laughable. It made no sense why it was there, and it wasn’t clever at all. The second one was a bat symbol with a knife through it. Like, oh, the Joker doesn’t like Batman, how are we gonna show that? Just tattoo it on his arm, it’ll look fine. And it sure didn’t. The fact that they are too lazy to even write a basic character motivation shows just how lazy the people behind this movie were. And finally, the worst tattoo on his entire body. The word “damaged” written on his forehead. This is easily the tattoo that took the whole theme of The Joker in this movie and just spelled it out for the audience. Literally! It would be like is Joaquin Phoenix’s Joker had “mental illness” written on his forehead or if Heath Ledger’s Joker had “chaos” written on his forehead. It’s just lazy. Plain and simple.

So obviously I have some pretty harsh opinions on Jared Leto’s portrayal of the Joker, but I mean, a lot of people did. Heath Ledger set a standard of Joker performance, and even before Ledger, the Joker wasn’t usually a laughing stock to the audience. I don’t feel bad saying that I think Heath Ledger and Joaquin Phoenix are the best on screen Jokers ever, and when I hear people say that Leto is the best Joker, it’s pretty insulting. Heath Ledger locked himself in a 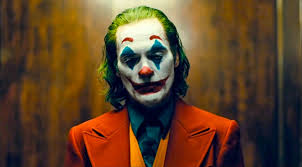 room for a month straight to get in character, Joaquin Phoenix had to lose weight to get the role, even Jack Nicholson did the whole method acting approach when he played Joker. What does Leto do? Disrespect his crew members, disrespect the art, and disrespect the character. Thank you for reading, if you have any questions, opinions, disagreement, fact corrections, etc. feel free to comment them below!