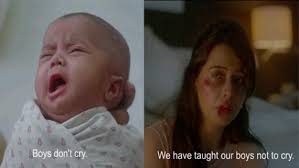 Muskaan here, with an issue I feel isn’t touched on enough. Recently, I came upon a short film by Vogue India, so naturally I was interested, since these magazines, like Unblushed, usually partner with actors who speak against issues in the country, and I’ve previously loved past pieces and I’m always happy to see influential actors come out and support pieces that are generally “unconventional” to the masses.

This particular one came out 2014, so 6 years ago, but I think it still applies and also, I want to talk about it. So hear me out.

It’s called “Boys Don’t Cry” and even featured a well known actress from the late 80s for a second and a half. It started off well, and I was invested. As it unfolds, it hits each part of a person’s young life, starting at birth, going to about college. Each scene had a boy crying, and the ones around him scoffed at him, “Are you a girl? Boys don’t cry. ” His mom, his teacher, his doctor, his football coach (soccer for the Americans). Point is, that’s riddled in his head a ridiculous amount of times (seriously, he literally came out of the womb crying). Crying is weak. Crying is not a sign of a man. Crying is feminine and undermines his own worth.

I was holding on to the end, hoping, praying this would end right. Finally, we touch on the negative effects of teaching boys to suppress emotions. Finally, a topic we so often ignore:  Men’s mental health.

Two minutes later, the scene flashes to a young man, eyes red enough to seem like he was about to cry. I hold my breath. Have they finally come to see what this does to young men as they grow up? Will we finally have justice?

Then they zoom out.

He’s twisting the arm of a woman—his spouse I’m assuming. She collapses on the floor, surrounded by a shoe and an overturned lamp. She’s brutally beat up, with a swollen lip and bruised eye. Then the actress appears and says, “From the beginning, we teach boys not to cry. Perhaps it’s time we teach them not to make girls cry.”

And then “the end,” screen’s blank, and I catch my face in the reflection. A little confused, and a lot annoyed. I look over the description really quick, and it’s the same thing—

“We teach our “tough boys” not to cry, but instead we should teach them not to make women in their lives cry.”

Now don’t misunderstand this—Yes. It’s an important message. It’s high time we teach people to control their anger, to stop allowing them to grow up and think they can act like this. Stop averting our eyes at domestic violence, both physical and mental. We need to respect our spouses; they are not objects. They are not property. Another thing was that both of them looked like educated people, employed and living a secure life in a flat. This showed that abuse can live anywhere, whether you are educated or not, well to do, or not. So yes, it’s an important issue, just not the right one for this piece.

The build up was for another issue, and I’m sure everyone thought that was where it would go, and I don’t know, this end was just undermining, almost like they acknowledged the problem but brushed it aside. Many of the men in my own life are victim of this. My cousins around their parents, my friends, and now for the jump—my maternal grandfather. We meet him once every 5 years, and even then he’s constantly checking his behavior around us, finding it unnecessary to smile in pictures, to talk about anything sensitive, to go out and have ice cream with us, to just do something to do it. “What will people think?” is his favorite line, and I don’t blame him. Obviously, that’s the train of thought that’s prevailed for centuries, and that’s who he is. That’s improved now, but not enough to say that the mentality’s gone. What’s instilled in our parents will at some point come out to damage us.

We talk about women, and unrealistic body standards, and things that affect us, and they’re imperative to discuss, definitely, but often it’s forgotten that our counterparts can feel just as inferior as we can.

Anyway, those were my two cents on the matter, you can take it anyway you want, I’m just closing here since this is getting to be a bit long, so farewell till whenever I’m in a mood again!