My Acceptance to The Electoral College 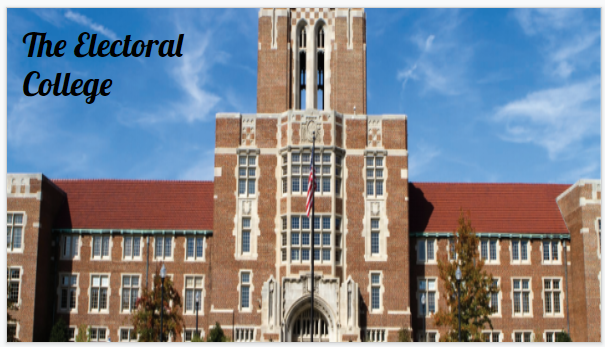 Just like many of you, I was just your average high school student.  When I was a junior, however, I went online and was looking for colleges, hoping that one would catch my eye.  One fateful day, I got a letter in the mail that was from The Electoral College. I heard about this “Electoral College” when my parents were watching the news; it was only talked about every four years—which makes sense because every four years another class graduates.  I was intrigued, so I did some research on this “Electoral College.” Everyone calls me a “dummy dumb” or “a small brained individual” because I thought that the Electoral College wasn’t a real place, just a conglomerate of representives who vote for a person to take potilical office, but what do they know?!

Despite the crushing weight of criticism from my peers, I Google, “Who graduated from the Electoral College?” and to my disappointment, nothing came up.  I thought, that’s impossible!  There is no way that I’m the dummy dumb here.  I have to prove those boomers wrong. I grabbed my chromebook, a 2 liter of Monster, and I got to diggin’.  I looked on every website, but to no avail. I just kept digging and digging, until an idea came to my big brained head, what if I can’t find it on the regular web because it isn’t on the regular web…. It’s on the DARK web.  I makes sure no one is looking, and I open up an incognito tab on chrome and look up “darkweb.com.”  To my surprise, it worked; I was on the dark web. From here, I only have to do minimal digging, like prison camp, big guy with a pickaxe digging, and I found out those who graduated from the Electoral College.  These are the people who graduated and their degrees: Barack Hussain Obama- majored in Presidency and minored in Representation, George H. W. Bush- majoring in Presidency and minoring in Elections, George W. Bush- majoring in Presidency and minoring in Aero Engineering, Donald J. Trump- majored in Business and minored in Foriegn Affairs, Hillary Clinton- majoring in Women’s Studies and minoring in server “moving”, Dwyane “The Rock” Johnson- majoring in Wrestling and minoring in Cooking.  These are just some of the several thousand famous people who graduated from this secret college. How did I get accepted to such an underground university? To answer these questions, I called one of the graduates from the university.

“You are now on a secure line to the President of the United States” is what should have been said, but when I call old Donny up, he just addressed me as Mr. Volodymyr Zelensky and asked me if I could look into someone called Hunter Biden.  I don’t really know who that is, so I just told him that I’m not Voldemort Zelensky, I’m a high school student who got a letter of recommendation. He said that he understood and told me that it was a “yuge honor to be given such a good, very good award from the best president ever.”  I hung up the phone and gave up on this Electoral College thing. Until the next morning when I was woken up from my bed, stuffed in a sack, and dragged outside to a van, where I was taken to a big, offshore facility.

With the sack still over my head, I heard a voice that I hadn’t heard for 3 years, “Hello, my fellow American, I am back.” Obama took off the sack over my head and told me that he was the one who sent me the letter in the mail, and that it was “top secret” and to not tell anyone about it.  After this discussion, Obama led me outside to reveal this glorious, yet simple school building (I attached a postcard). I was given a uniform―a suit with a red tie, a pen, and notebook. He said, “Here are your supplies to success. I will see you in 4 years. Good luck!” and just like that, Obama floated up into the clouds, to the point where I couldn’t see him anymore.  Just like that, after a couple hours of searching, I was accepted into a college I didn’t even apply to.

Four years later, I graduated with a major in Obamanomics and a minor in Voting.  I got reunited with my family and my friends. I’m now a lead representative in the surface level Electoral College, the one about voting and stuff, and most importantly, I got to see Obama again!