Problems with the American Suburb 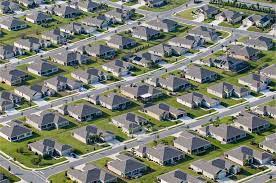 The early-twentieth-century concept of the American Dream, a single-family home with a white picket fence and a turf yard in the middle of a cookie-cutter neighborhood, is no longer an ideal. Research has begun to show that it is energy-inefficient, cost-inefficient, bad for the environment, and doesn’t provide great benefits for the people who live in it. Yet, they are still prevalent in our society today: we live in one. Why? Because many have not looked into this issue far enough. So, what are the problems with the American suburb?

Let’s start with the first aspect of the American Dream: a single-family home. Single-family homes are the least energy efficient home type. Households in apartments in buildings with 5 or more units use much less energy than those in single-family homes, partly because of their smaller size; and partly because they tend to be insulated on multiple sides by other units, reducing their heat waste. Less energy consumption equates to fewer greenhouse gas emissions from the burning of fossil fuels, which is good for the environment. Not only does it benefit the planet, but it also reduces the living cost of households because of lower heating and electricity costs.

Most single-family homes come with single-family yards, which bring their own set of problems. Every year, American lawns consume 3 trillion gallons of water, 200 million gallons of gas from mowing, and 70 million pounds of pesticides. Turf lawns are costing Americans a significant amount of money and resources, and both gas and pesticides are pollutants that cause further harm. Gas emissions from lawnmowers pollute the air, and pesticides contaminate water sources and poison local wildlife. These generic turf lawns provide no environmental benefit, often taking away from natural spaces for bugs, pollinators, animals, and other plants. Getting rid of these lawns (by replacing them with more natural ones, or by allowing for more natural conservation spaces) would be cost-efficient, better for resource conservation, and better for the environment.

Single-family homes with private lawns take up a lot of space. In recent years, suburbs have sprawled further and further from their center, creating a vastly tangled web of streets lined with single-family homes and green turf lawns. This sprawl has diminished the amount of land available for wildlife, and will likely continue to do so as growing populations demand more of these American Dream style communities. But these suburbs are not only damaging to our environment: they can be detrimental to our health. Surburbians, due to the suburban sprawl, are often reliant on automobiles, as this style of living takes up so much space that businesses and schools are pushed far from communities. People who live in these non-walkable neighborhoods tend to be 6 to 10 pounds heavier than those in more walkable communities. As cars are the second largest expense for the average American household, this non-walkable style of living imposes great economic and health burdens on families in these areas.

The suburb is energy-inefficient, cost-inefficient, environmentally unfriendly, damaging to human health, yet remains a staple of the American Dream. As our population continues to grow, the suburb will continue to sprawl and deepen its impact on our world. We have to decide: is the American dream, when it comes to this suburban style of living, really worth it?